Perfect for a day trip from Hilton Head Island or Savannah, you will discover a place teeming with rich history and culture. Our historic district, which is named in the National Register of Historic Places, boasts original Gullah-constructed homes, churches, and schools. Evidence of a once-thriving Gullah oyster community can still be found throughout the island. Nowadays, Daufuskie hosts around 400 full-time residents and 3 private/semi-private communities. Our landmark artisans have received national recognition for their hard-to-get-to galleries with island-inspired art. Much of Daufuskie’s land is undeveloped and roads are unpaved which gives the island its characteristic “are we still in the United States” feel. Whether it is part of a guided tour with Tour Daufuskie, LLC or a fun excursion exploring in your own golf cart, a day trip to Daufuskie Island is a day you will not soon forget!

How to Get to Daufuskie 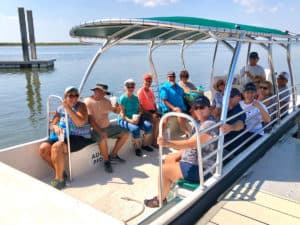 Part of our charm, and what makes Daufuskie so authentic and irreplaceable, is that there is no bridge to Daufuskie Island. The only way to get here is by boat.

It is an important aspect of Daufuskie’s culture. This isolation has quelled growth common on sea islands in the South Eastern United States. But it does add a factor in visiting the island.

Luckily, Tour Daufuskie has partnerships with a few water transportation services to aid you in getting to the island. 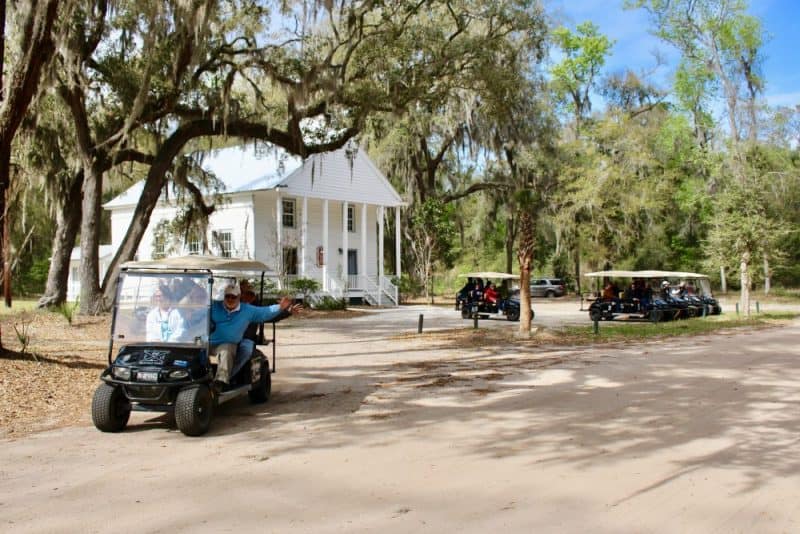 Many people believe cars are not allowed on Daufuskie. This is a common misconception. There are some car restrictions within the private communities, but many folks outside of the resorts drive cars. That being said, 99% of all visitors to Daufuskie rent golf carts.

Although the island is small, dirt and paved roads weave throughout the community. Golf carts allow visitors to explore the galleries, eateries, and natural and historic spots that line Daufuskie’s scenic roadways. 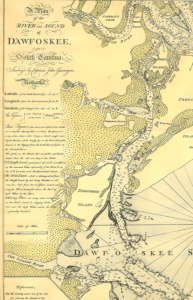 Unearthing the vast and colorful history of Daufuskie Island is no easy task. With artifacts found on the island dating as far back as 7000 BCE, it is apparent that the island has a rich history. But with limited written records and resources, Daufuskie’s history is ever evolving as new information comes to light.

The first inhabitants that we have records of are the Creek, or Muskogee, Indians. Cultivating the many natural resources of our area, the Muskogee Indians thrived on Daufuskie.

Early European explorers, including the Spaniards, French, English and Scottish, first explored Daufuskie dating back to the 16th Century.

Original land grants were given to Native American traders, although relations became strained and after a number of skirmishes the Muscogee Indians were forced off the island in lieu of death or imprisonment. Lands were gifted to numerous families, eventually leading to 12 plantations on Daufuskie Island.

Plantations were small, and produced crops such as sea island cotton, corn, potatoes and indigo. Filled with Loyalist during the Revolutionary War, Daufuskie experienced a number of clashes with the Tories of Hilton Head. Post Revolutionary War, plantations on the island continued to produce and export crops. The island stayed relatively quiet during the Civil War, however there were Union troops stationed on Daufuskie.

After the Civil War, some lands on Daufuskie were repossessed by original slave owning families. Parts of the island were sold to freed slaves returning to the area. This gave rise to Daufuskie’s Gullah population. Being forced to America through slavery, descendents of West Africans worked the lands on the South Carolina sea islands. The descendents of these West Africans kept tight their cultural heritage, creating the rich Gullah culture now present.

Up until the mid twentieth century, Daufuskie had a substantial population of mostly Gullah families. Oystering, farming and logging were just a few economies that drove Daufuskie Island. But competing pricing, pollution and limited resources led to an incredible decline in the island’s economy. Many families left the island in search of work, establishing roots elsewhere.

Developers came onto the island in the 1980s and 1990s. Haig Point, Bloody Point Resort and Melrose were developed as resort communities. Daufuskie Island now boasts around 450 full time residents.

For the full historical experience, join Tour Daufuskie on our History and Artisans Tour.

Daufuskie Island is truly one of the best kept secrets on the east coast for the perfect family coastal vacation.  Although a day trip is a great adventure, staying on the island allows for a true Daufuskie experience. 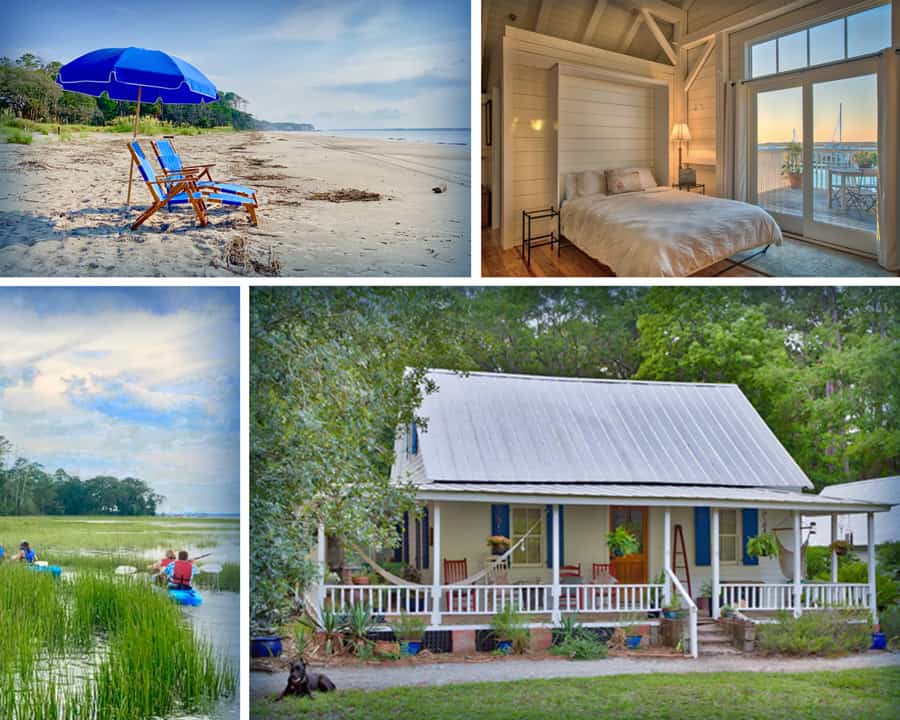 These creative minds have made a splash among locals and visitors alike. Collectively they have been showcased in national and regional magazines such as Coastal Living, Southern Living, Martha Stewart Living, Charleston Home, Hilton Head Monthly, and more! 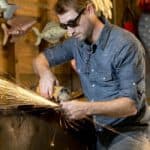 The Iron Fish Gallery & Studio (est 2001): Chase Allen has received national recognition for his coastal sculptures and unique pieces.  He won the 2014 American Made Audience Choice Award hosted by Martha Stewart, and his artwork has been shipped worldwide. Chase uses inspiration from the island’s rustic feel to create these eye-catching fish, mermaids, blue crabs, stingrays, and more. No two pieces are alike, as each sculpture is hand-cut, hammered, and painted right here on Daufuskie Island. The gallery is open every day from 8am-6pm.

Wine and Woodworks (est 2015): Mike Loftus builds hand-crafted wooden boats, canoes, kayaks, and more in his woodworking shop while his wife Joanne offers local organic wine and beer. For the eager-to-learn, Mike offers kayaking kits and teaches folks how to build their own boat! The craft wine & beer shop is open every Saturday afternoon, but poke your head in anytime to see if Mike is around.

Daufuskie Island Rum Company (est 2014): Tony Chase and his partners offer delicious rum with an “American-made” guarantee. The Rum Company offers tours Wednesdays trough Saturdays. For $7, you’ll receive a half-hour tour followed by a tasting. Ever-creative, Tony has crafted a variety of flavors such as Vanilla, Gold (aged in bourbon barrels), “Fuskie Fire”, and Spiced (made with 9 secret ingredients). 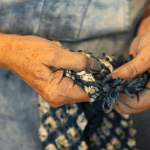 Daufuskie Blues (est 2015): Leanne Coulter and Rhonda Davis have teamed up to create gorgeous indigo-dyed fabrics. They have set up shop in the historic Maryfield School, and you can find them inside most afternoons hard at work.

Daufuskie Soap Company (est 2014): Jan Crosby draws inspiration from the sights and smells of Daufuskie Island to create her home-made soaps and body products. She makes these soaps in small batches with unrefined shea butter and coconut oil, and the result is always luxurious.

:  This historic church was established in 1881, and rebuilt in 1884 after a fire burned down the original.  Joining the church back in those days was not easy; you had to prove your faith and show your enthusiasm to become accepted.  These days, the church remains active as a non-denominational community church.  Services are Sunday mornings at 10:00am.

Maryfield School: Built in the 1930s, this school was created for the Gullah children on the south end of the island.  Transportation from the North end began in 1950, making Maryfield the primary school for Daufuskie children.  This is the school at which the famous author Pat Conroy taught in the late 1960s, later documenting his experience in the novel The Water is Wide.  Maryfield School is now home to Daufuskie Blues which makes indigo-dyed scarves and fabrics.

: This small museum was named after Billie Burn, known as the first true “Daufuskie historian.” She is also the author of An Island Named Daufuskie, which documents countless details of the island’s past.  Inside the museum you’ll find artifacts found on the island such as arrow heads and pottery shards.  Knowledgeable museum volunteers can help answer questions you have about the island’s fascinating past.  Before this was a museum, it was the Mt. Carmel Baptist Church.  This was a multi-use space; it was a church, it was a school for a period of time, and it held nighttime reading classes for adults.

Gullah Learning Center: To widen your understanding of Gullah history and culture, spend some time inside this quaint museum full of Gullah artifacts, writing, clothing, and more.  This building was the Jane Hamilton School in the 1940s; children on the north end of the island attended this school before transportation took them to the Maryfield School.  Both the Billie Burn Historical Museum and the Gullah Learning Center are maintained by the Daufuskie Island Historical Foundation and are open Tuesdays-Saturdays 1pm-4pm.

Frances Jones House: Painted in bright blue and adorned with a breathtaking centuries old live oak, the Frances Jones house is a picturesque favorite for visitors.  Frances was an important figure in Daufuskie’s history; she was one of the first teachers at Maryfield School, eventually became principal, and was a prominent fund-raiser for the reconstruction of the First Union African Baptist Church.  Some folks lovingly called her “Daufuskie Mayor.”  Since Frances’ death, the house has been restored from ruins by the Palmetto Trust for Historical Preservation, along with many other historic houses in the area.

Moses Ficklin Cottage: Here you will find yet another Gullah-constructed home positioned under a giant oak tree.  Moses Ficklin was one of Daufuskie’s undertakers. Again, this house is now privately owned, but it is worth a drive-by. 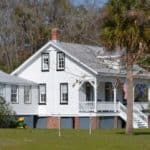 Bloody Point Lighthouse: Erected in 1882, this lighthouse housed a rear-range and front-range light which helped boats navigate safely into the Savannah River.  Due to erosion on the island, the tower was deconstructed and the keeper’s house was rolled back on logs to its current location.  The keeper’s house has been converted to a museum and gift shop.  Inside the shop you may sample some of Silver Dew Winery’s sweet scuppernog wine.  On this property a “Lowcountry Heritage Walk” was created to showcase some historically-significant crops such as sea island cotton and indigo blue.

What Else is There to do on Daufuskie? 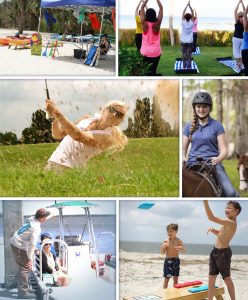 In addition to visiting Daufuskie’s renowned artisans or exploring her rich history, there are a number of other things to do and see on the island.

Beaches: Daufuskie offers 3 miles of pristine sand beaches, all of which are open to the public.  You may lounge in the sand & sun all day, or perhaps take a walk down to Bloody Point, a historic battleground between Native Americans and English settlers.  Bloody Point is also the local fishing hole of Daufuskie, for those of you who may want to test your luck.  Dolphins, Pelicans, and Osprey are a common sight for beach-goers, as well as a wide variety of shells.  Loggerhead turtles use these beaches for nesting, so be mindful by only using red flashlights at night from the months of May-October and never driving your golf cart on the beach.

Farm: Take a guided tour Daufuskie Island Community Farm or grab a self-guided pamphlet at the Welcome Center to explore on your own.  This farm was created in 2010 on “a dream and a dollar” by Pat Beichler along with friends and partners.  Interested in volunteering at the farm during your stay?  Contact Pat at (678)897-0942 to find out more.

Authentic Gullah Tour: Take an authentic Gullah tour with Sallie Ann Robinson, our very own local celebrity. A sixth generation native, her experience on Daufuskie is a lifetime of knowledge being born and raised on the island. She has given tours on Daufuskie for many years sharing the history of her family and what life was like then and now.

Bells at the Beach:
Enjoy the beautiful ocean views while dining at the Beach Club. With indoor, outdoor and screened porch seating, their new menu and dinner special are sure to please the entire family!

Lucy Belle’s Cafe (843)341-6477:
“Daufuskie Entertains” catering business opened up their new restaurant, Lucy Belle’s Cafe, at the end of 2016.  It has been a hit ever since, with people flocking to their doors for lunch.  The meals are southern-focused, hearty, yet quickly arrive after ordering.  The cafe is located at the intersection of Benjie’s Point Rd and School Rd.

D’Fuskies: At the public landing at county dock, D’Fuskies provides deli sandwiches and pizza, as well as a general store for all your needs.