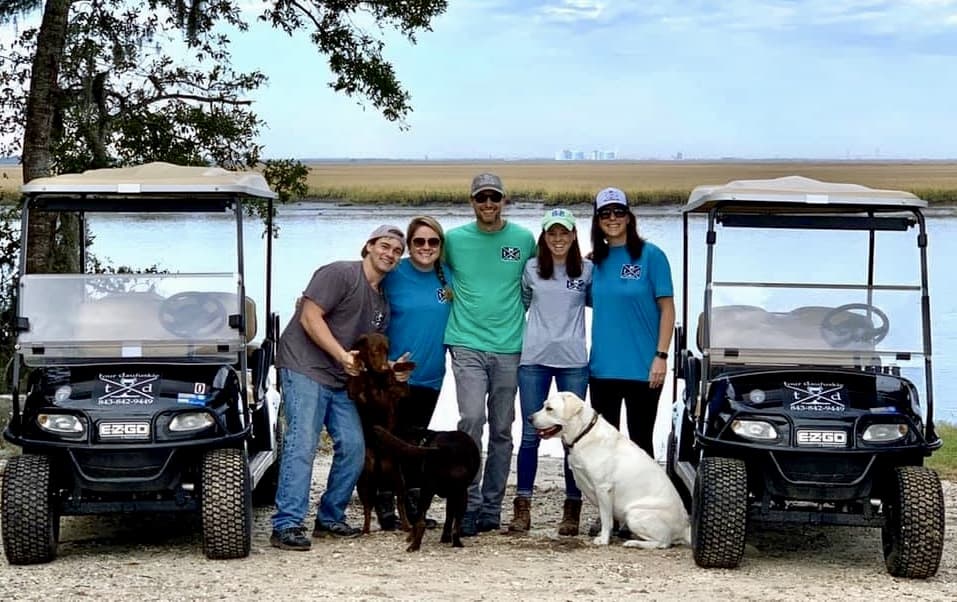 Owner – Chase Allen has lived and worked on the island for 19 years and is more known as “The Iron Fish Guy” than the owner of Tour Daufuskie, LLC.

After 11 years speaking with the visitors at his gallery, The Iron Fish, Chase realized families visiting Daufuskie Island were frustrated that although Daufuskie was pristine, underdeveloped, and rich in wildlife, there were no eco-tourism activities offered. Finally, in 2011 Chase hired a like minded outdoors enthusiast who had the time to run the day to day operations, thus establishing Tour Daufuskie, LLC. Today, Tour Daufuskie remains the only locally owned and operated eco-tourism tour company on Daufuskie Island.

Anna continues to have a passion for education. Paired with a great admiration for the outdoors, she is able to cultivate a shared love and respect for Daufuskie’s natural beauty, history and culture with those visiting the island.

Reservationist and Guide – Laura Leigh and her husband, Clinton, moved to Daufuskie Island just over 13 years ago.  After moving to Savannah in 2004, they quickly discovered Daufuskie and fell in love immediately.  Before the birth of their first child, Presley,  they made the decision to move to Daufuskie to create roots and start their family.  Only a year later they had their second child, Clinton IV, and feel tremendously blessed to be living in such a great community and beautiful place.

Laura Leigh was a stay at home mother for many years, she was very involved with her children’s school, Daufuskie Island Elementary, as well she has always been an active member of the community and part of different organizations on the island.  She joined the Tour Daufuskie team in the Fall of 2018. Her love for Daufuskie with all its beautiful natural qualities and interesting history is something she wants to share with everyone.

Operations Specialist and Guide – Kade has lived on Daufuskie for 17 years. Kade joined the Tour Daufuskie team in April of 2019 to manage operations and one of our kayak guides. Growing up on Daufuskie Island gives Kade a unique outlook not only on the island but on life in general. His positive attitude and infectious laugh add to our excellent staff!

Kade loves exploring new things and is always searching for the next adventure. Although this paradise island is his home, Kade’s dream is to pursue a career in aviation and travel the world. Until then, golf carts and kayaks are his wheelhouse.

Reservationist and Operations Specialist – Caroline grew up in Lexington, SC. Her and her family started vacationing on Daufuskie Island in 1993. She deeply enjoys Daufuskie Island and in 2019 made it her full time residence. Caroline started with Tour Daufuskie as an intern in April of 2019, and has moved up to a full time position.

Having been drawn to the island for so long, Caroline has a true love for Daufuskie. She very much enjoys being able to share this love with island visitors!

Greeters – And if you happen to see any one of these three hooligans running around the island, just remember they’re on the Tour Daufuskie staff and here to make your day that much better!

Every day is an adventure. It is an opportunity to learn, grow and better understand the natural wonders around us. It is with this spirit that the Tour Daufuskie team operates.

Through Tour Daufuskie, we hope to give visitors a local perspective and foster a sense of unplugged appreciation.

See what you can discover on Daufuskie Island with your talented guides!