When Jan Crosby started experimenting with home-made soaps, she had no idea that she would eventually become the number one provider of bath and body products for Daufuskie Island. With an impressive variety of scents and products, “Daufuskie Peach” pleases the taste and style of anyone who comes through her door. Her soaps are made and sold in-house, which invites customers directly to her back porch.

Oddly enough, the roots of Daufuskie Peach began with a dinner party. A handful of Jan’s friends attended John C. Campbell Folk School, where students can choose to learn about a variety of hand-made crafts (wood-turning, pottery, blacksmithing, spinning, etc). These friends came together for dinner and showed off what they learned during their attendance of the folk school, from French Bistro cooking to doll-making. “I came away from that dinner so inspired,” Jan explains, “I thought, ‘I want to do something crafty and creative too!’”. While checking out the folk school catalog, the category of soap making jumped off the page at her, and she was immediately hooked. Jan started doing research and became more interested with the more she learned. She started playing around with soap bases and essential oils to get a feel for the creative process. Eventually she realized her desire to make the soaps from scratch, which is a much more intensive process than using a soap base. “I experimented for a better part of a year on and off before I actually sold anything,” Jan says.

After about one year, Jan was convinced to showcase her soaps at a fundraising event for the Daufuskie Island Community Farm and Artisan Village. “I sold a fair amount considering I’ve never sold before,” she recalls, “People thought it was great, and I thought ‘I need to start a business!’” Daufuskie Peach was formed, and Jan had success initially by selling her soaps at the local farmers’ market. 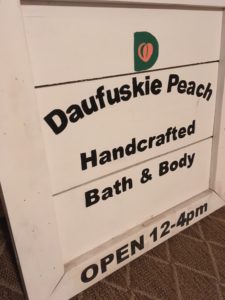 At first, Daufuskie Peach was based around 8-10 soap scents. “I then realized that I really needed products that compliment the soap,” she explains. She thought about what she, as a customer, would hope to find at a bath and body store. Jan knew right away that pump lotion was to be added to her list, and over time richer products such as body butters and scrubs entered the mix. Lotion sticks were later added for convenience sake. “I carry one with me always, in my purse,” Jan says, “It’s just so handy.” Her newest addition is a bath bomb, which hit the market last month. 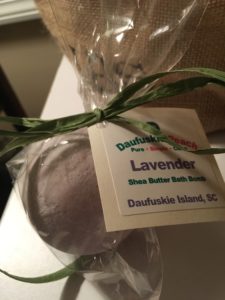 Bath bombs are the newest addition

“I had to start [Daufuskie Peach] part time at first,” Jan explains. She had a full-time job and two children along with her soap-making. “You hit a crossroads sometimes where you have to make the decision – what’s it going to be?” Jan left the financially security of her full-time job in 2015 to commit completely to Daufuskie Peach. Would she change anything if she had the chance? “No regrets,” Jan says with a smile.

the soaps offer a scent for everyone

Jan has over 30 scents including peppermint, honeysuckle, lavender, and a “camp fuskie” bug-off bar. Common curiosity wonders what Jan’s favorite scent is. Her top three:

Even though Jan creates a number of additional bath and body products, the original is number one. “Soap is still my favorite.” 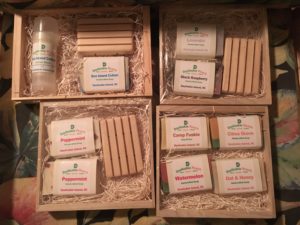 Jan draws inspiration from the island for her scents, and she is lucky enough to call Daufuskie her home. What does she love most about living on Daufuskie?

“Something I realized very early on was that there is such a strong sense of community here… It’s such a great place to raise kids. You can really control the pace at which life hits these kids here. Because it’s such a slower pace, they grow up to be more conscientious and observant about the community, the environment and the people they are around.” 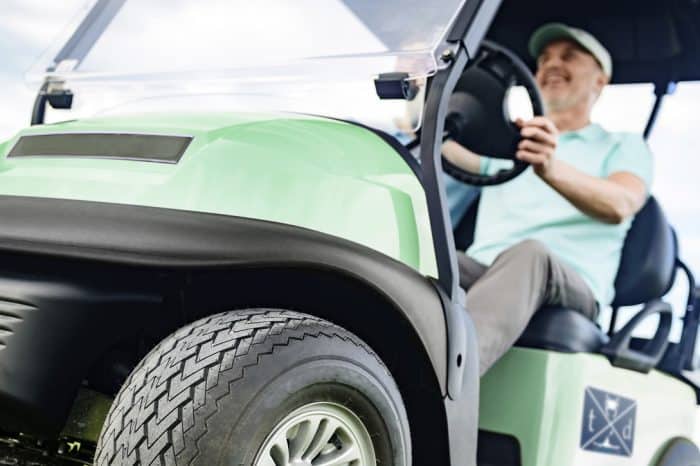