If you have ever taken a tour around Daufuskie Island, chances are that you have seen a very peculiar animal scurrying about.  Appearing to be an over-sized squirrel with grey and black coloration, these curious creatures stop tourists in their tracks.  They are Grey Fox Squirrels, and have been prevalent on Daufuskie Island for hundreds of years. 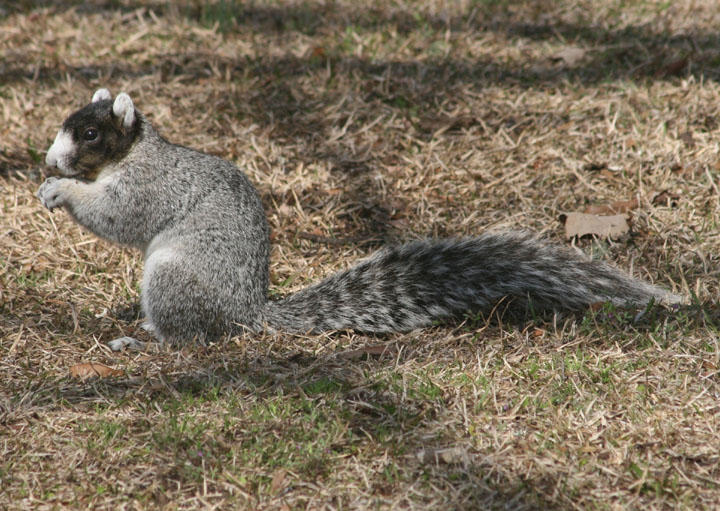 Why do the Grey Fox Squirrels look so different from the rest of the squirrel family?  Scientists have come up with an interesting hypothesis, and it all comes down to the relationship between the squirrels and a tree.  Fox Squirrels love to eat the seeds from cones of the Longleaf Pine tree, which used to be very prevalent on Daufuskie.  Longleaf pine cones produce some of the largest cones in the Southeastern United States (see below).  It is thought that their large body size was advantageous for the Fox Squirrel when trying to manipulate the pine cones to extract the seeds, and over time larger body sizes were selected for.  Their black-and-grey coloration may have something to do with Longleaf Pine as well.  This pine tree is extremely fire-resistant and flourishes in areas that experience fire.  In historic times on Daufuskie, leaf litter would build up on the ground and lighting strikes would cause fires.  The smokey colors of the Fox Squirrels may have helped camouflage them in a charred forest.  Whatever reason for their funky appearance, they are certainly a special species on our island!

A close relative to the Grey Fox Squirrel is the Eastern Grey Squirrel, pictured here

Interested in finding out more about wildlife on Daufuskie Island?  Join TD’s Naturalist in a “Wild Daufuskie” Eco tour!