On Daufuskie Island, the sounds of howling wind and plummeting rain from Hurricane Matthew were quickly replaced Saturday morning by the sounds of running chainsaws and bobcats.

About 100 of Daufuskie Island’s residents stayed to weather the storm – this is about a quarter of the population.  Many of them chose to stay as to not abandon their animals, such as Erica Veit with the Marsh Tacky Society, Pat Beichler with the Daufuskie Island Community Farm, and Laura Winholt with the Daufuskie Island Cat Sanctuary.  “We did research about hurricane survival, watched the local weather carefully and planned for the worst,” Winholt said, “and staying was calculated carefully.”  Others felt safer hunkering down at home than dealing with the hectic and sometimes dangerous process of evacuation.  No matter what the reason, these folks agreed on one thing: they hoped the storm was not going to be as disastrous on the island as the media predicted.

At a press conference on Friday morning, South Carolina Governor Nikki Haley warned that Daufuskie Island would be “under water”.  This statement may have served as a final plea for Daufuskians to evacuate, but most of the residents could not be convinced.  Daufuskie is on relatively high ground compared to surrounding barrier islands; at 15-17 feet above sea level in the middle of the island, a storm surge of 7-9 feet would have a hard time submerging the island.

The “Daufuskie 100” did their best to secure themselves with food, water, gasoline, and shelter as they waited for the arrival of Matthew.  He hit overnight to early morning with 50-60 mph winds and torrential rain.  Some slept through the entire ordeal, while others were kept up all night by the sounds of their vibrating houses.  Once the winds died down enough to assess the situation, the Daufuskie 100 stepped outside to hundreds of down trees.  “You couldn’t walk more than 75 feet before you find another fallen tree”, one local explained.  Some folks closer to the edges experienced flooding in their yards and basements; one couple even had an alligator spend the night in their front yard.

The passing of the storm was quickly followed up by a massive clean-up effort by the Daufuskie 100.  There was no meeting or coalition beforehand – everybody just got to work.  Backhoes, chainsaws, and bobcats were running from sun up to sun down in an attempt to clear down trees and debris.  By Sunday, the majority of the roads have been effectively cleared. 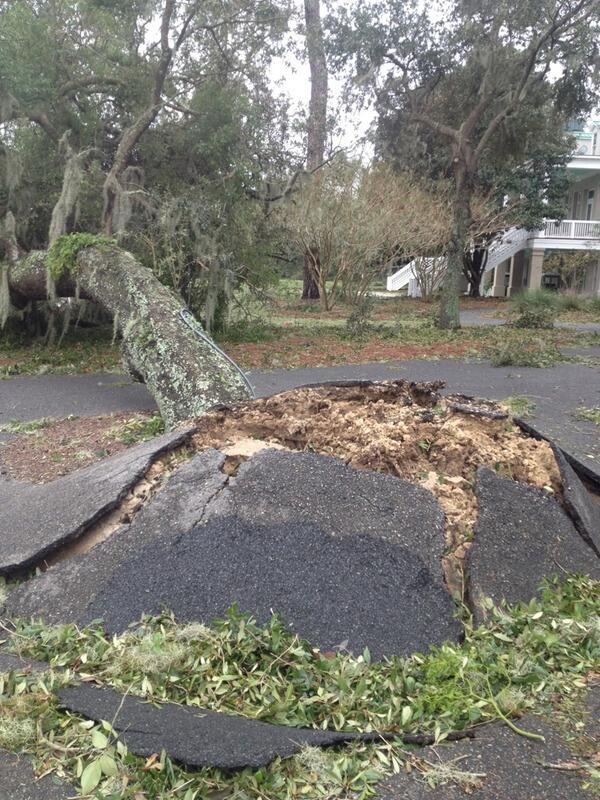 Winds were strong enough to pull trees out of the asphalt (credit: Janet Adams)

One house in Haig Point lost a corner to a potential tornado touch-down (credit: Lynell Linke)

The overall consensus among residents is that the island was relatively spared.  A handful of folks weren’t so lucky – Lynell and Rob Linke lost a corner of their house to what may have been a tornado touchdown.  Another couple is now dealing with the aftermath of a fallen tree on their home.  Many residents have likely lost their boats.  However, most of the island remains intact.  By some miracle, Daufuskie’s horses and farm animals made it through.  The biggest issues the locals are dealing with are still down trees and fallen power lines.  And, of course, nobody has power. 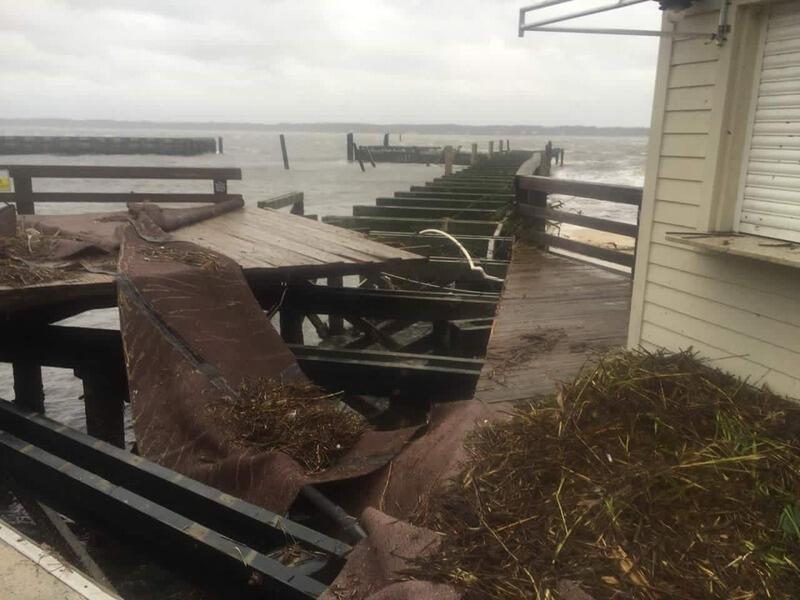 Getting back to Daufuskie Island anytime soon could prove difficult for the residents.  One of the major ports on the mainland that provides passage to Daufuskie Island is not in good shape.  Palmetto Bay Marina on Hilton Head Island took a severe beating; most of the dock has been destroyed and many of the boats can now be seen stranded on land.  Not to mention the main bridge back to Hilton Head failed inspection and it could take days or weeks to get it back to working condition.  Folks who have attempted to drive back to Bluffton have been turned around by officials.  The Beaufort County Operations Center determined it could “easily be two weeks” before folks can return to their island, and power could take weeks to be restored.  It is during this time that the locals’ patience will be tested, as everyone is eager to get back to help clean up the island and reunite with their Daufuskie family.

The Daufuskie Island Fire Department is back up and running – they are working alongside locals to help clear the island and restore safety.  They’re providing both potable and non-potable water at the Fire Department, and have brought some food provisions for the residents.  One local has started the brilliant idea of a “Daufuskie Island Food Bank”.  Hundreds of residents left their homes with refrigerators and freezers full of food – food which is better off eaten by the Daufuskie 100 than left to spoil in the house.  With permission, fridges and freezers are being raided to help keep the island well fed.  A Daufuskie Disaster Fund has been receiving donations to aid the clean-up effort.